At the 1997 French Summer Camp in Mejannes-le-Clap, one of the senior French instructors asked me to give a name to an international Aikido community whose size was growing rapidly with each passing year. The community has coming into being naturally. It has progressed into an international family with a strong and distinguishable character through an interchange of instructors from the USAF Western Region, British Aikikai, and various French dojos along with their associate members in Greece, Switzerland, and Germany. Naming this community was needed partly because of the European political situation where organizational control is very rigid surrounding Aikido. It includes control by the government which tends to kill the free and open flow of the students-teacher relationship which of the utmost priority in our Aikido activity. Because of that situation, many concerned members have been looking for a new direction away from the current state of confusion and unhappiness there. They have been looking for a sense of identity in their Aikido lives. After two years of careful thought, I chose the name Birankai. Biran is a Buddhist term meaning a cosmic storm that occurs in the moment before cosmic order shifts. It is a force of recovery, spontaneously manifesting itself to restore order. The storm can be powerful and violent. Yet, at the same time it is one that heals through cleansing and purification. In January 2000, I decided to formally start Birankai, taking advantage of the millennium and Year of the Dragon. During the USAF Western Region Summer Camp held in San Diego in June 2000, I appointed Dr. Rikko Varjan to be first head member of Birankai family. 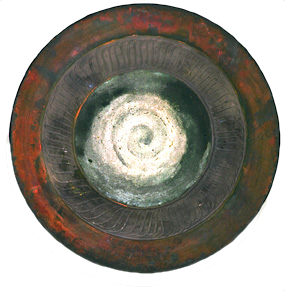 The bowl shown here encircled by three patterns perfectly satisfies my vision of Biran. In the center, a powerful spiral energy arises out of a mysterious background of three colours: ash white, deep green and blue. The second pattern (as if done with a knife or spatula) surrounds it with smoky brown flower petals that are beautifully stained with deep green and blue from the center, like an aura shooting forth the spiral energy. The pattern reminds me of the effects of Amida yasuri (Buddha’s aura), often radiating outward in the work of Japanese tsuba. The light brown base blends with these three colours again to appear like a spreading stain. Overall, strong firing and smoky effects without any obvious glaze work makes it beautiful mysterious. The bowl’s contour is gradually raised from the base to the outer rim at 40 degrees, simultaneously expressing expansion and contraction, or forces of centripetal and centrifugal energy. I can’t be sure of the bowl’s origins, but it looks to me to be Bizen or Tamba pottery of Japan. I had found it sitting amongst some rubbish in the middle of my garage in the summer of 1999, just about the same time that I chose the name Biran. It came with such perfect timing and coincidence, I first thought. Later, I learned that my wife found it on top of a garbage can in a neighborhood alley. It surely happened to be a gift from Heaven with a blessing for Birankai.   T.K. Chiba, Founder of Birankai

The Birankai is the school founded by T.K. Chiba Shihan. Birankai International represents the culmination of a long-held wish of Chiba Sensei. He has long desired that his students, who are scattered across the globe, should have a single organization to support their training. The role of Shihans (highest teaching certification) pupils of Chiba Sensei is:

To stimulate the growth of the art by providing strong support for the teacher-student relationship. Birankai is recognized by Hombu Dojo. 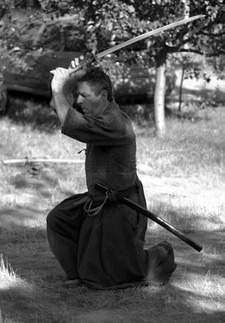